Through collaboration with the Saint Lucia Tourist Board UK Office, Wildlife Art by Saint Lucian Artist and Environmentalist Dr. Christopher Cox was featured at the recently concluded British Birdwatching Fair (Birdfair). The Birdfair held Friday August 15 to Sunday 17 August 2014 at Rutland Water Nature Reserve in Rutland.  He is one of the artists featured under the TEPA’s recently launched “Taste of Saint Lucia” Campaign in the UK and is among the few recognized wildlife artists in the Caribbean. 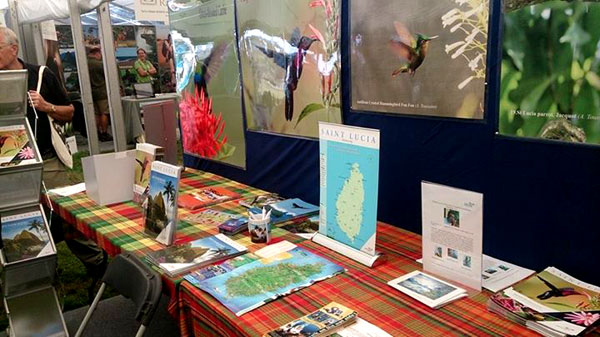 Dr. Cox started painting wildlife and environmental themes when he joined the Saint Lucia Forestry Department in 1985.  Over the years, countless hours of fieldwork in some of the most remote forests on the island awakened his appreciation for the stunning diversity of plants and animals.  His keen interest in environmental conservation has been the inspiration behind his work.  Christopher is best known for his realistic interpretations of local flora and fauna, and in recent years has developed a signature line of products and souvenir items under the brand Chris Cox Originals that includes fine art prints, greeting cards, calendars, t-shirts and more.

Christopher Cox Art is currently being promoted and marketed under the TEPA’s “Taste of Saint Lucia” Campaign in the United Kingdom.