The five Saint Lucian product lines spotlighted at the just concluded Agroalimentaria 2017 trade show in the Dominican Republic (DR) held their own and attracted interest from host country buyers as well as those from Dubai, Martinique, the US, France, Bahamas and Turks and Caicos. 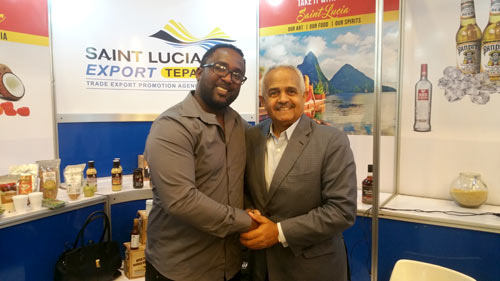 The TEPA contingent reports that suppliers were especially impressed by the originality and uniqueness of products such as the sweet potato and breadfruit flour and the sweet potato granola, as well as the craft beers and the honey based vinegar and pepper sauce. The tastes of the rums of Saint Lucia Distiller’s and the superior packaging of Baron’s sauces were also a persuading factor for many suppliers. 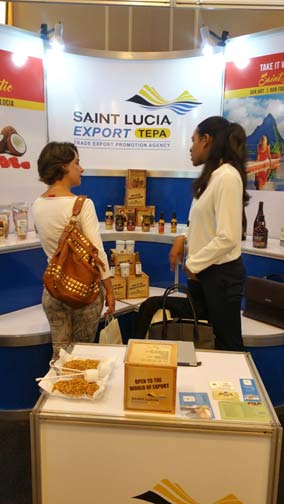 Despite a very competitive condiments market in the DR, TEPA managed to showcase Baron’s Pepper sauce at a nationally televised cooking show hosted as part of the trade event, out of which leads were secured with suppliers in the Dominican Republic, Martinique and Spain. As with condiments, the virgin coconut oil market also proved very competitive. Efforts will continue to leverage the interest expressed by two the Dominican Republic suppliers.

Antillia Brewing Company’s flavoured beers generated interest on the strength of their novelty. TEPA is hopeful that interest shown from the Turks and Caicos, Bahamas, United States and the Dominican Republic will translate into more business and new markets for the company.

The Agroalimentaria trade show is recognised as one of the most important Food Industry trade fairs in the Caribbean region. Despite Saint Lucia and the DR being signatories to the CARIFORUM trade agreement, there has been very little trade by Saint Lucia in the Dominican Republic due in great part to shipping, language barriers and exclusive distributorship agreements.

Mr. Badal said that given these factors, it was important for TEPA to “do its utmost to leverage the opportunities which the event presented. By participating, TEPA could exploit the opportunity to forge partnerships with the key stakeholders in the commerce sector in the Dominican Republic”. This aim was realised as TEPA was successful in securing meetings with key players from the Chamber of Commerce and the DR Centre for Export and Investment who “were excited about increasing trade and cooperation between our two countries”, He concluded.

The trade event ran from Thursday May 18th -20th. It is an initiative of the Dominican Agro-industry Board (JAD) and the Dominican trade and investment promotion office (CEI-RD).